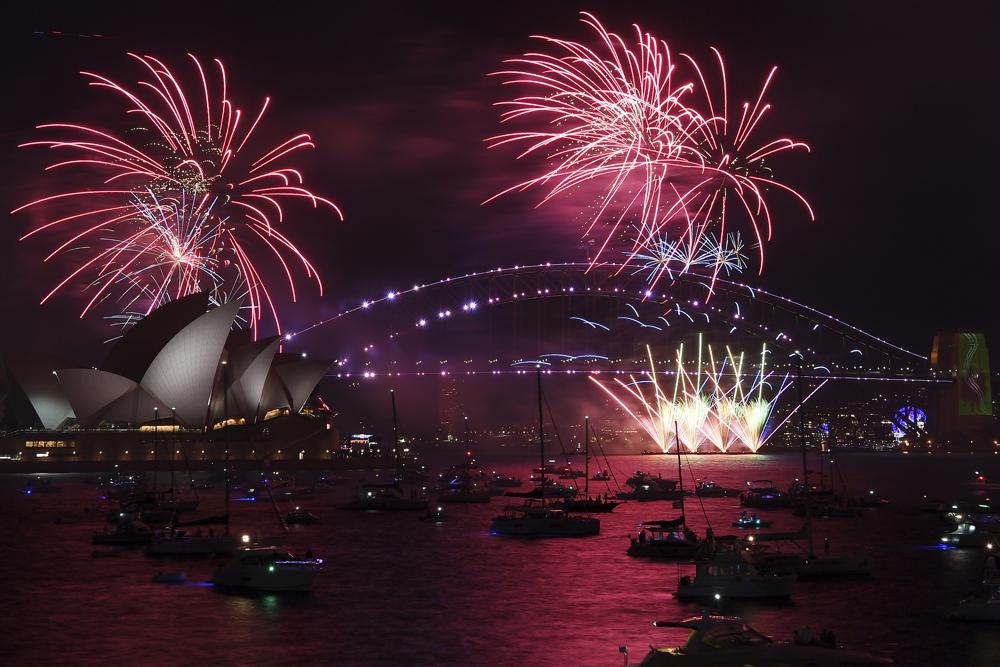 New Years Eve cut by omicron; many hope for better in 2022

It was a common feeling as people around the world started to welcome the New Year.

In many places, New Years celebrations have been cut or canceled for the second year in a row due to a wave of coronavirus infections, this time brought on by the highly contagious variant of omicron.

Even before omicron struck, many people were happy to say goodbye to a second year of pandemic crisis.

But so far, at least, the omicron surge has not resulted in the same levels of hospitalizations and deaths as previous outbreaks – especially among those vaccinated – offering a silver lining for 2022.

New Zealand was one of the first places to celebrate the New Year with an inconspicuous display of lights cast over Auckland landmarks including the Sky Tower and Harbor Bridge. This replaced the traditional fireworks display. Although there has not yet been a community spread of omicron in New Zealand, authorities still wanted to discourage crowd gatherings.

Neighboring Australia, however, continued to celebrate despite an explosion in cases of the virus. Some fireworks were set off in the early evening to give the youngest a glimpse of the centerpiece of the festivities, the famous Sydney Harbor Bridge and Sydney Opera House fireworks.

Hours before the celebrations began, Australian health officials reported a record 32,000 new cases of the virus, many in Sydney. Due to the wave, crowds were much smaller than in the pre-pandemic years, when as many as 1 million revelers crowded inside Sydney.

Due to the location of the international date line, countries in Asia and the Pacific region are among the first to usher in each new year.

In Japan, the writer Naoki Matsuzawa said he would spend the next few days cooking and delivering food to the elderly as some shops would be closed. He said the vaccinations had made people less anxious about the pandemic, despite the new variant.

“Numbness has set in and we’re not too scared anymore,” said Matsuzawa, who lives in Yokohama, southwest of Tokyo. “Some of us are starting to take it for granted that this won’t happen to me.”

Like many others, Matsuzawa hopes life will improve in 2022.

“I hope the restrictions can be lifted,” he said.

Across Japan, many people were planning to take New Years trips to spend time with their families. On New Year’s Eve, people thronged to temples and shrines, most wearing masks.

However, some seemed to ignore fears of the virus as they dined and drank raucous in downtown Tokyo and flocked to shops, celebrating not only the holidays but also a feeling of euphoria at having been freed from the recent ones. virus restrictions.

In Seoul, the capital of South Korea, the annual New Years Eve ringing ceremony has been canceled for the second year in a row due to an increase in the number of cases.

Officials said a pre-recorded video of this year’s ringing ceremony would be shown online and on television instead. The ceremony had already attracted tens of thousands of people. Last year’s cancellation was the first since the ceremony began in 1953.

South Korean officials are also planning to shut down many beaches and other tourist attractions along the eastern seaboard, which are usually teeming with people hoping to witness the first sunrise of the year. South Korea said on Friday it would extend the strict distancing rules for another two weeks.

In India, millions of people planned to ring in the New Year from their homes, with nightly curfews and other restrictions removing the bubbly of celebrations in major cities like New Delhi and Mumbai.

Authorities have imposed restrictions to keep revelers away from restaurants, hotels, beaches and bars amid an increase in omicron-fueled cases.

But some places, including Goa, a tourist paradise, and Hyderabad, an information technology hub, have been spared nightly curfews thanks to a smaller number of infections, though other restrictions are s still apply.

Many Indonesians have also given up their usual festivities for a quieter evening at home, after the government banned many New Year’s celebrations. In Jakarta, fireworks, parades and other large gatherings have been banned. , while restaurants and shopping centers have been allowed to remain open but with curfews enforced.

Vietnam has also canceled fireworks and celebrations. In Hanoi, authorities closed central streets, while in Ho Chi Minh City, the public was prohibited from watching live countdown shows, which were to be broadcast on social media instead.

In Hong Kong, around 3,000 people had planned to attend a New Year’s Eve concert featuring local celebrities, including boy group Mirror. The concert will be the first major New Years Eve event held since 2018, after events were canceled in 2019 due to political unrest and last year due to the pandemic.

In mainland China, the Shanghai government has canceled events including an annual light show along the Huangpu River in the city center that typically draws hundreds of thousands of spectators.

There was no plan for public festivities in Beijing, where popular temples have been closed or have limited access since mid-December. The government has called on people to avoid leaving the Chinese capital if possible and is demanding testing for travelers coming from areas with infections.

Popular temples in eastern Chinese cities Nanjing, Hangzhou and other major cities have canceled the traditional New Year’s “luck ringing” ceremonies and asked the public to stay away.

But in Thailand, authorities were allowing New Years parties and fireworks to continue, albeit with strict security measures. They hoped to slow the spread of the omicron variant while lessening the blow to the country’s tourism sector. New Year’s prayers, which are usually held in Buddhist temples in Thailand, will be held online instead.

In the Philippines, a powerful typhoon two weeks ago wiped out the basic necessities of tens of thousands before New Year’s Eve. More than 400 people were killed by Typhoon Rai and at least 82 are still missing. Half a million homes have been damaged or destroyed.

Leahmer Singson, a 17-year-old mother, lost her home in a fire last month, then the typhoon swept away her temporary log cabin in Cebu City. She will welcome the New Year with her husband, who works in a glass and aluminum factory, and her 1 year old baby in a dilapidated tent in a coastal clearing where hundreds of other families have erected small tents from debris, sacks of rice and tarpaulins. to protect against rain and sun.

When asked what she wanted for the New Year, Singson made a simple wish: “Hope we don’t get sick.”

Republished with permission from The Associated Press.


Views of the publication:
71

Commentary: Will population growth dominate the climate debate in 2022? | Remark

A deep dive into the politics of Hayao Miyazaki

After a fiery speech on democracy, can Biden keep his promises?